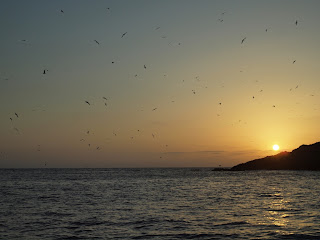 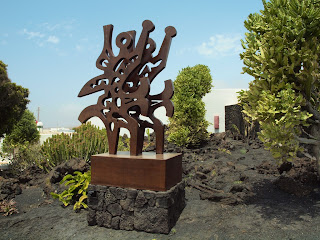 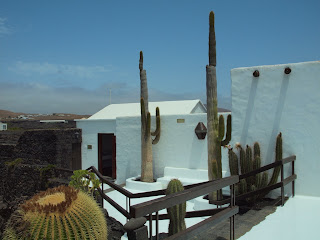 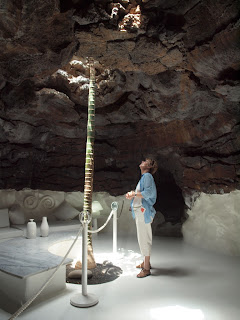 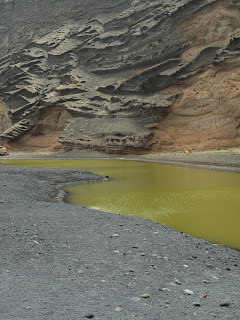 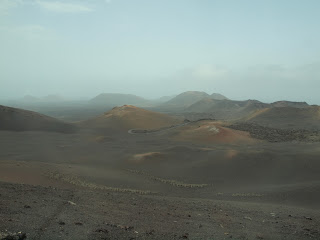 A last peaceful evening at the anchorage of Selvagem Grande, surrounded by returning birds that had a lot to talk about.

We had a real good nights sleep in an otherwise not so cozy anchorage, but the wind didn't pick up until well into the morning. We had planed to wait until at least 12 noon before setting off to the south end of Lanzarote, as otherwise we might arrive still in the dark. In the end we left 20 minutes early and arrived an hour and a half too early. That was because the wind picked up way more than predicted and while we kept reefing an reefing there was no way we could slow Taniwani below 7.5 kts. While the predicted wind should have been around 15 kts, we had near 30 most of the way picking up to 50 in the acceleration zone near Lanzarote. Even at the southern end of the island, where we had thought we might get in calm conditions it was still blowing. So we meandered around in the area until we got a bit of light and then entered the marina.

Marina Rubicon is a huge development that had just opened with just a few pontoons in operation back in 2003, now it is a vast place with long distances to cover. While surrounded by tourist resorts, restaurants and shops, it still hasn't become a naturally accepted buzzing place and one isn't really inspired to stay longer than necessary or hang out in the not very populated restaurants. When we visited Marina Puerto Calero the next day by car, we found that place much more excepted, with busy restaurants having much more of a flair. One wonders what makes the difference, but it seems to be lots of details.

But marinas isn't what makes Lanzarote. The character of the island is volcano and Cesar Manriques. His art and his heritage, as well as the volcanic landscape are a delight for the eye.

We enjoyed these views for two days traveling across the island by rental car. Tomorrow morning we plan to leave early so that we can reach Las Palmas on Gran Canaria still at daylight. Seems there should be plenty of wind to do the 95 miles during daylight.

Last evening with the birds at Selvagem Grande

His house build into a lava field

Living room in a laval hole

Lagune in a volcanic crater 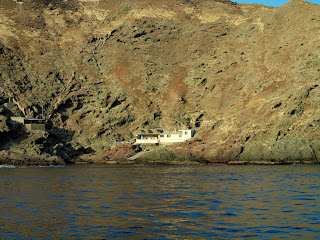 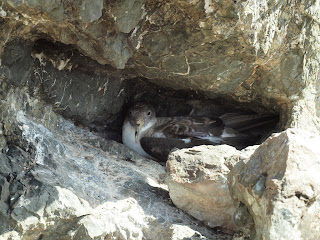 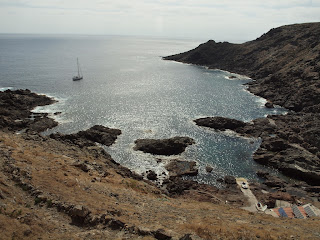 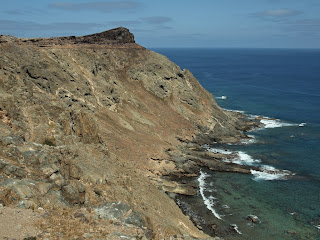 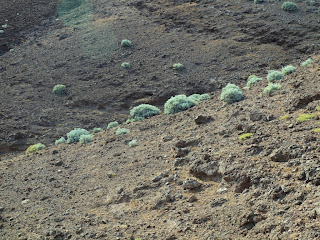 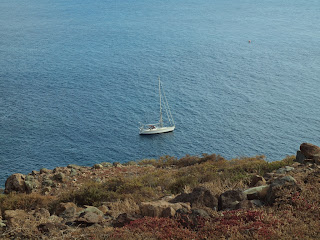 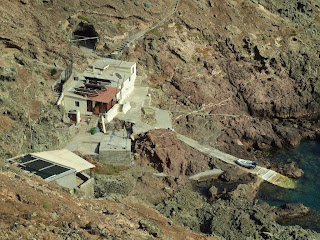 It seems we had picked the right weather window for this visit. Still had a swift sail from the Desertas until around 4 in morning when the wind died down to some 6 knots from behind and we needed some help from the engine. As we usually go rather slow under engine it got late morning before we arrived at Selvagem Grande. First we found that the previously accurate electronic charts of the island now were off some 150m, something normal in remote corners of the world, but not anymore in European waters. We carry electronic charts from multiple makes and it was interesting to see that all were consistent in the error, and all charts older than mid 2009 were still perfect. Makes you wonder what happened.

It didn't really bother us and we happily anchored on shore. Anchoring in teh Selvagens is not easy, or I should better say, safely anchoring in the Selvagens isn't. The ground looks much the same as the land, flows of previously molten lava, luckily with some ledges were a sturdy anchor can hold as long as the direction of pull doesbn't change too much. Diving on the anchor confirmed that we had indeed dropped our anchor into such a groove and that this groove was orthogonal to the direction of our chain, of which we had generous 60m out. Only the reef looming two boat lengths behind us looked a bit scary. Usually the NE trade would send you out of the anchorage if your anchor dragged. This time the wind, however light, was west of north which meant we were laying across the bay.

Went ashore to talk to folks in the station, off course not without some wine from the Azores for the lone evenings at that remote station. We were made very welcome indeed, maybe because of the wine, or maybe because not many yachts had shown up this year, but most likely because they were just a nice crew: Two park wardens, two female scientists or students and Dr. Frank Zino who is the only person still allowed to live on the island in his small house, right next to the park station. His father who was researching the Cory Shearwaters had rented the land in the early sixties for 100 years, when it was still privately owned by a banker. His son, who may be about our age is still continuing the research work and spends about 3 weeks at the beginning and at the end of the breeding season on the island. 3 weeks is the choice, as this is the interval the navy supply ship comes by to bring the next shift of rangers.

We were asked to return to the station around 5 pm, when the sun was a bit lower, when Mauricio, the younger warden would take us around the island. We then got the grand tour and hiked around most of the island. A fascinating place and by far not as scarce and boring as one might expect looking at the dry place from the sea.

Ranger station under the rock face, with Dr. Zino's house to the left.

Taniwani anchored in Enseada da Cagarras, our dinghy on the ramp and the roof of the ranger station.

Southeast end of the island.

Green scrubs, which have not been there when we visited in 2003, then all had been eaten by rodents which have now been extinct.

Taniwani from the top of the world

Ranger station, also from high up. 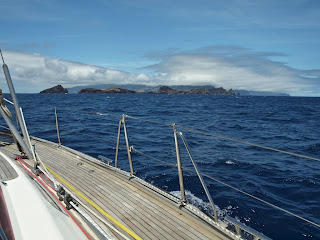 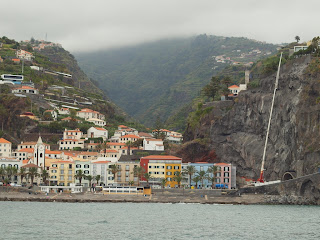 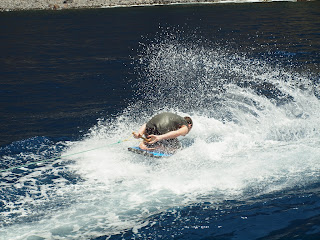 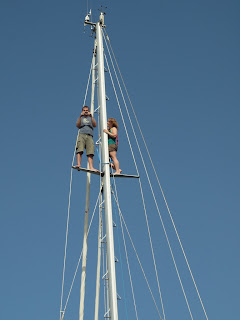 After a pleasant week in Port Santo, we sailed on to the main island: Madeira. The approach beautiful as always and the island certainly one of the nicest to look at from the sea.
Went straight to Funchal first, which is despite the very limited marina facilities, one of the most spectacular places one can visit by boat. Nowhere is the yacht harbor just in the midst of one of the nicest towns which surrounds the harbor and climbs up the steep slopes, creating sort of an arena feeling for those down in the center of the harbor. We came just in time to watch one of the fireworks they were having now on every Saturday in June. Went out with the dinghy to watch it and then were asked on board of a local yacht also out to view the fireworks, to share some drinks. Later back in the harbor, same procedure on our boat and so it got late.

As were now were already quite late in our otherwise completely free cruising plan for this season, we thought we could as well wait a few days for our son Felix and his new girl friend Floortje who were to spent two weeks in the island soon. And so we were soon back into island touring mode with all the associated activities like surfing behind the dinghy and climbing around in the rig.

When we were finally ready to leave Madeira, the wind was up too strong for enjoying the nature preserves of Islas Desertas and Islas Selvagem and we had to choice of waiting three days or skipping these lovely places.

We decided to wait. 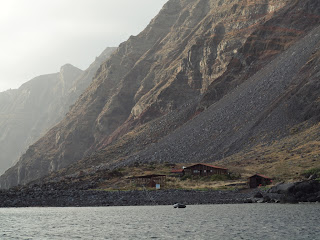 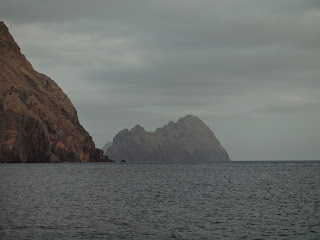 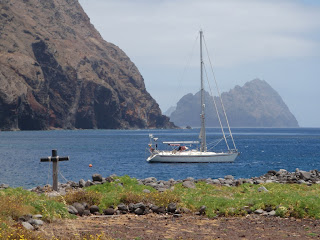 The nature preserve of the Islas Desertas is only a 18 to 25 miles trip from Madeira, depending on where you leave. And yet, the scenery could not change more. Coming from a green and warm island, you all a sudden find yourself in behind high rocky cliffs with very little vegetation and furious gusts of wind falling down the steep cliffs. Typically one carries too much sail on the last few miles when the wind increases from the typical 20-25 knots to easily 40 and more.

While we had waited for lighter wind, they were really only to be expected the next day when we wanted to visit the Selvagens, but having been at the Desertas in sort of similar conditions, we knew that the anchorage very closet to the 400m high cliff is usually rather calm. This time it was worse and we started to think that we may have to move on. But we gave it a try, picked up the mooring from the supply ship and lay relatively calm.

On shore we were greeted by a friendly park ranger who showed us around. All in the vicinity of the station as the path up the cliff is currently closed to the public due to rockfall. But we were told they are working on it and it should open again in the near future. The view from up there must be worth the 400m climb.

Usually the gusts that fall down the cliff hit the water 100-200 m offshore and close to the cliff it is quite nice. But now the wind was getting more northerly and over the night the land cools down and provides less uplift and as a result it got really gusty around 5 in the morning. The mooring seemed to hold and while we didn't get any more sleep, we had a nice and slow morning before setting off to the Selvagens around noon. 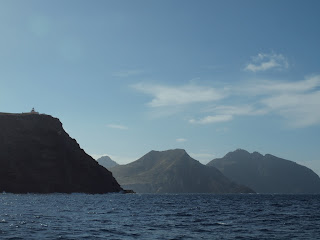 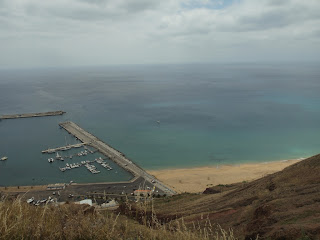 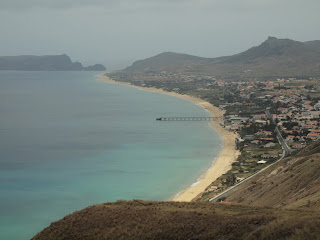 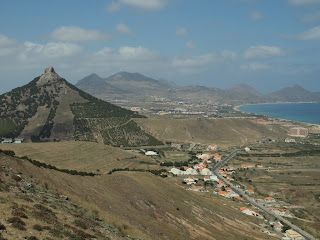 We left Portimao very early in the morning of Tuesday May 31, a day later than planned as on Monday the weather was still rather ugly and the wind right from where we wanted to go.
When we left the wind had moved on to Northwest and was still quite strong (25kts) once past Cabo Sao Vicente. Waves were still very confused from the changing wind direction and so we had a fast roller-coaster ride the first day.
What was a little bit more than needed on the first day, was a little bit less than ideal on the second, especially since the wind had moved to NNE and hence was coming more from behind. But it was lovely sailing with the sea matching the wind. Same on the third day (Thursday) on which we arrived at Porto Santo just after 6pm. First picture is approaching Porto Santo.

Found a place in the marina, but were told next day that we would have to move. With the alternatives not really big enough for our boat and the marina facilities pretty poor for the fairly high price, we decided to move out of the harbor again and anchor in front of the large sand beach. It turned out a great choice, with no swell and the boat lying much calmer as in Portimao. That all in front of a lovely scenery and crystal clear water over perfect sand.

In the second picture you see us anchored outside the harbor wall. The third shows the rest of the enormous beach looking west. The forth picture shows the beach looking east from the other end of the island - Taniwani visible a a small white speckle.

Yesterday we took a taxi for a two hour island tour and had a really lucky pick. Our 72 year old cab driver in his lovely maintained old Mercedes, told us a lot about life on his island, the changes it underwent and all this in quite good English.

Shopping is also quite convenient, driving the dinghy to town, more or less right in front of the well stocked Pingo Doce market. Much easier than walking two kilometers from the marina.

Only the weather is not particularly good. It is not raining and the wind is from the north, which is ideal for our anchorage, but it is rather cold and does not get more than 18C during the day. The water is 22C and swimming s fine.

Plan is to move on to Funchal tomorrow (Monday) or a day later.