Our second stop in the Azores this year was in Ponta Delgada the capital of the biggest island in the group.  The strong Northeasterlies were abating when we left Santa Maria for a 55 miles day sail to the much bigger island of Sao Miguel. Apparently the swell was still going on, as it was quite rough in  the marina, where one had to watch out not to fall on the wobbly pontoons. Actually it felt worse than out at sea. But the Marina is very big and there is usually plenty of space to run a line across to the next finger, this way keeping the boat off the own finger and preventing it from jamming heavily into the fenders once and so often. Already the next day the conditions were much smoother and for the next two and a half weeks that we ended up spending here it remained like this.
We had to look after Beate's medical problems and found nice and very helpful doctors in Ponta Delgada. This caused us to settle in here and day by day the town grew on us. In the past we used to only stop here for a few days and soon move on to the next island. We thought it was just ok to tour island with it's many attractions and that the town was just a town without much character. We changed our view on this and found that with Taniwani as a nice apartment right inside the bustling town, this wasn't all that bad a situation.
It does seem though that in oder to get a long term handle on Beate's medical problem, we will soon have to head back to Madeira with Taniwani and home from there and cut this summer's cruise a bit short. Up to here we had sailed in the pleasant company of our old friends, Henry and Kikki on Endelig, and our plans to continue on through the Azores have ended here, with Henry and Kikki having to return home for a family emergency and us soon returning back to Madeira. Henry and Kikki however plans to soon return to their boat and continue on a reduced schedule. You may want to check on their whereabouts once in a while at:  http://www.yacht-endelig.blogspot.pt
While mainly enjoying Ponata Delgada, Harald did have a car trip with Henry and Kikki to the eastern part of Sao Miguel, with its twin lakes. So, again there are some photos from that lovely part. For Harold it was the fourth visit to that area and you may find quite similar photos in older blogs. In Ponta Delgada we discovered a number of new things among then the old Fort in the harbor that is partly used by the military, partly a military museum - quite interesting and extremely moist. There is also a bell tower, flat topped without a roof, that offers a very nice view al across the town and harbor. 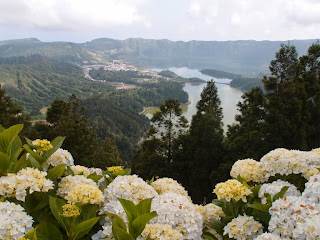 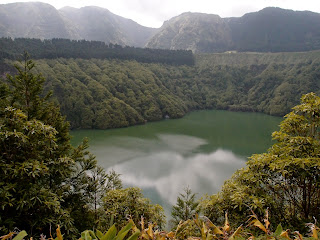 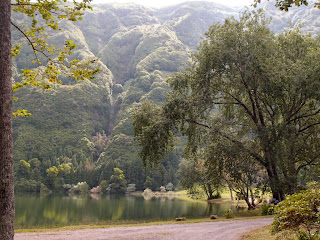 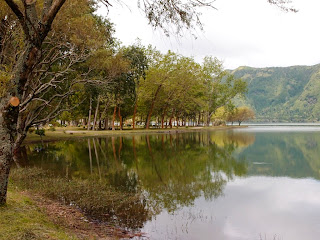 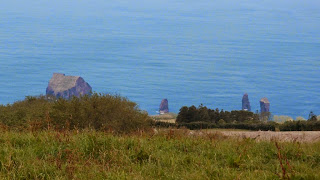 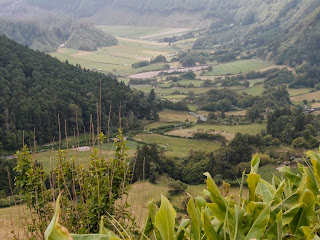 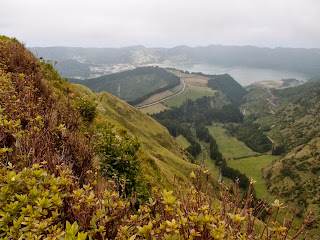 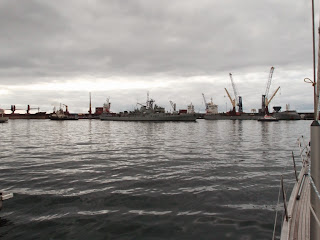 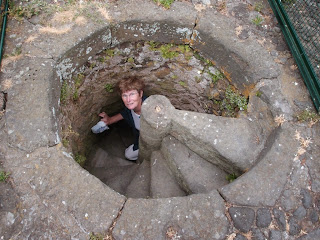 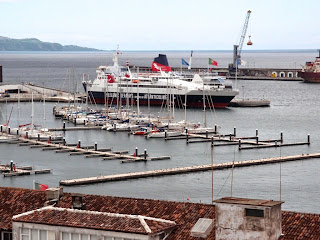 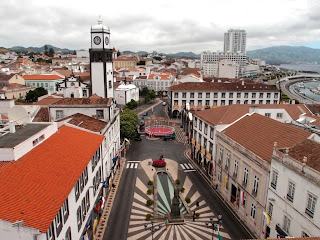 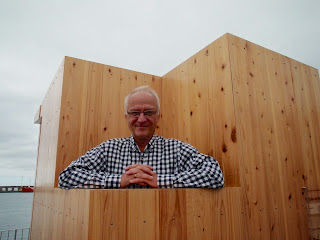 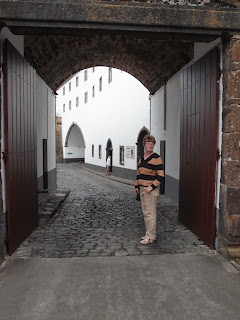 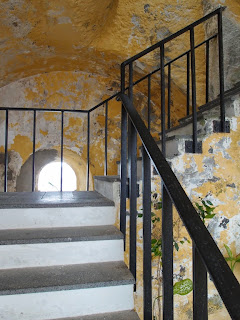 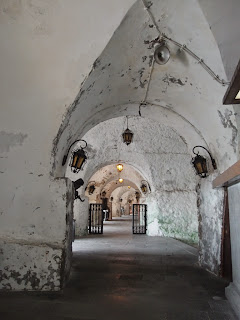 Even in a strong easterly swell, the marina in Vila do Porto on Santa Maria remains a tranquil and pleasant place. It is probably the best sheltered marina in the Azores. We definitely like the somewhat remote and sleepy place. Sleepy except for the busy fishing boats that kept coming in to unload and just turn around to head out again for another big load of tuna. Seems fishing is good this season. We spend a lazy week in the familiar place and as always carefully looked what had changed since last year, as we see a steady progress on the island. The economy is so small and the crisis so far away. In the past years the main project was the gigantic sea front at the eastern village of Sao Lorenzo and now, that this is finished, some magnificent old buildings that have been decaying over the years in Vila do Porto, are now being renovated. Also new is that the big travel-lift has started to operate and they now have a few boats on the hard there. It seems also a great place if need to get out of the water for a quick repair, as craning with the new 85 ton travel-lift is a steal at 90€ for a boat our size.
Harald had the usual land tour per rental car with Henry and Kikki of Endelig, but Beate preferred to stay on Taniwani not feeling too great. The pictures give some impressions around the island. For this time in the year the steady NE winds were a bit unusual, while the had brought us here quite swiftly if a bit rough, they caused a rather hazy weather around the islands. So, the pictures are lacking a bit of sun. 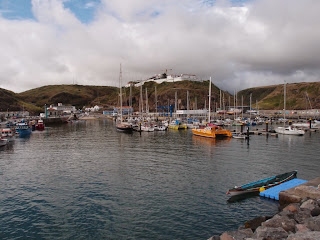 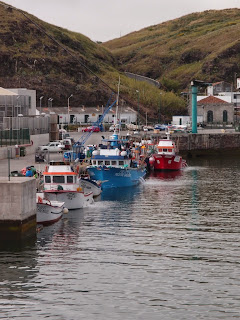 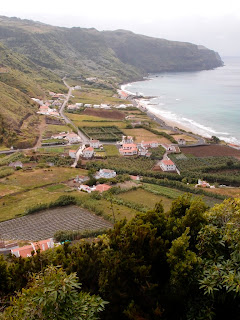 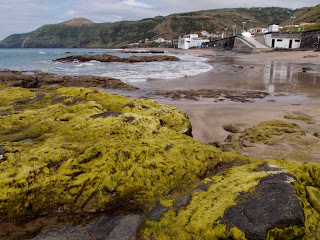 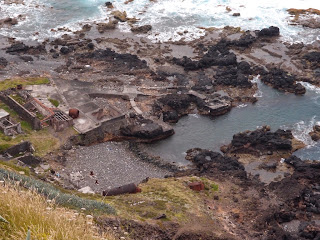 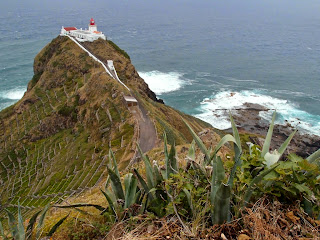 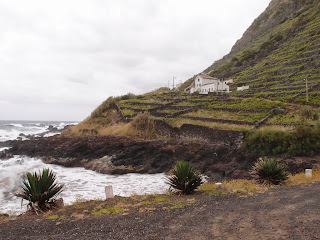 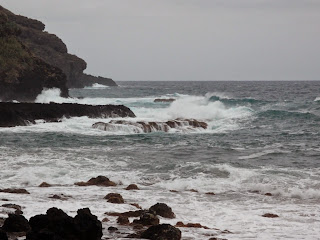 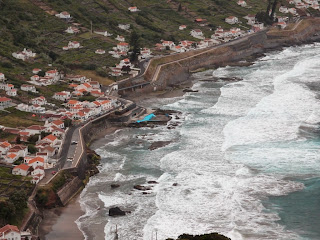 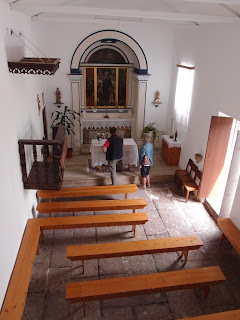 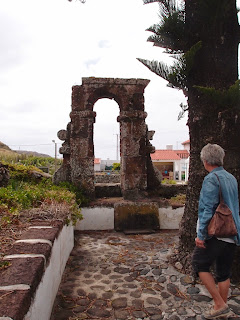 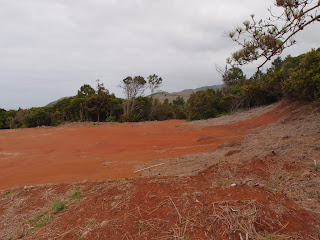