more Gomera, then off to the Azores 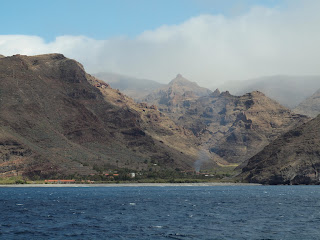 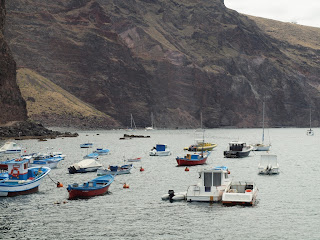 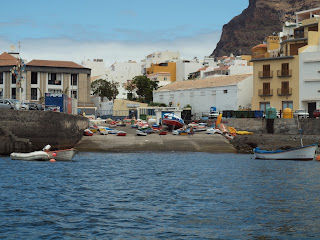 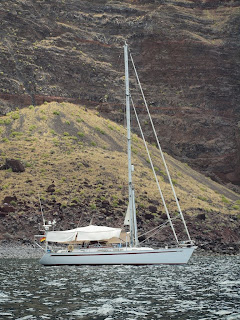 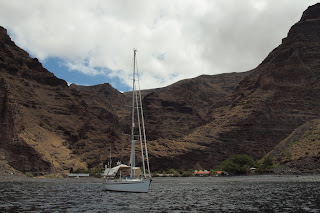 Pictures above: South coast of Gomera, Vueltas and the Valle Gran Rey anchorage.

Leaving windy San Sebastian took some time, first a few walks to the marian office and back, eventually with the proper receipt from Gran Canaria where we had payed the lighthouse dues for one month, the minimum, even if only a day in the islands. Now San Sebastian tried again to charge us the 50 plus Euros, but this was soon sorted out.

Then on to the fuel dock with careful maneuvering in the narrow marina and the gusty wind. Fuel is much cheaper in the canaries than elsewhere in Europe, Diesel goes for 89 cents right now. Strangely, you cannot just fill your tanks and pay whatever odd amount this may result in, no, you have to tell them for how many Euros you want to take fuel. Guessed and said 300, but it wasn't enough, was still far from full. So, asked for another 30 Euros. All done the nice man at the dock wrote the bill and walked of to process the credit card. When I looked at the bill it was €300.30! Told the man and took him a while to understand and then he couldn't believe I told him, not in the Canaries where everybody tries to take any little advantage or try to add something to a bill assuming the foreigners wouldn't notice, and there is usually no repeat business anyway. So this was completely outside the normal behavior and the good man now declared me the best friend. Then the credit card machine didn't work and so the two of us walked around the marina to the marina office one more time. From him I learned that this much wind even annoyed the local folks, and that it was not normal to just blow like that for now over a month.

We just unfurled a little bit of the genoa and surfed off towards the south of the island, maybe 3 miles and it went to zero wind as expected and stood that way all the way to Vueltas, the old fishing village at the Valle Gran Rey. Just a few miles further one could see the white crests, where the wind was coming around the other side of the island.

But we anchored in same place as in 2003 and 2004, a scenic anchorage under a huge cliff, half a mile from the village. A peaceful and quiet anchorage we thought. But around midnight salsa music exploded inside the boat, as if we had turned our stereo to the maximum volume. Incredible, the band was about 1 kilometer away and it sounded like they were playing inside our boat.

Not much sleep and from what we learned at the tourist office, two more nights like that. So we decided to move three miles south to a bay with the ruins of an old cannery. No music here, but certainly more swell, so that we slept just a bit better than the night before, but decided to move back to Valle Gran Rey. And now it was actually ok, as the band that played on the last night had decent rock music at a fraction of the volume. One could hear it, but it wasn't painful.

Our plan had been to sail to Hierro, before departing for the Azores, but it turned out we may have problems fitting into the harbor at Restinga and there was no way to get a rental car there, when our main purpose for the visit was to explore the island. So we thought about going to La Palma, where we had already been twice. It is indeed worth more visits, as it is a really beautiful island, and this time we would have sailed to the west side to Tazacorte, rather than the main town of Santa Cruz. From there it would also be 45 miles shorter to the Azores.

But then, looking at forecasts we noticed the opportunity to leave soon, with seemingly decent wind all the way, rather than too much wind at the beginning and none towards the end. And so we decide to leave on Saturday, July 23 directly from Valle Gran Rey. The course would lead us to the south tip of La Plama and then slowly away from the island on a Northwesterly heading. A total of 968 miles to the westernmost island of the Azores - Flores. 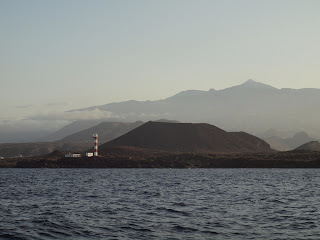 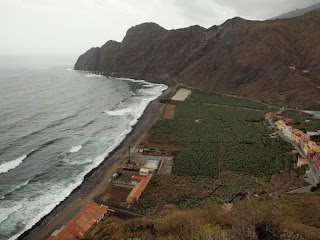 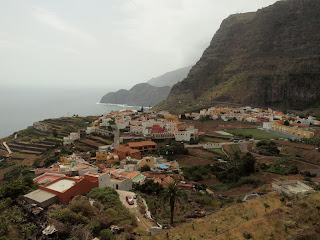 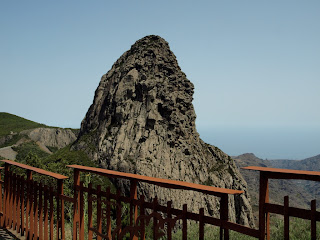 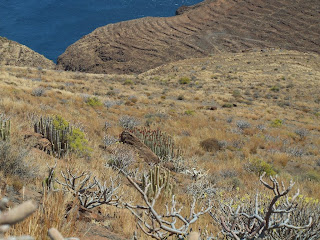 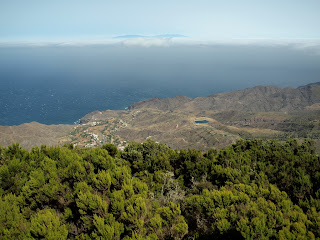 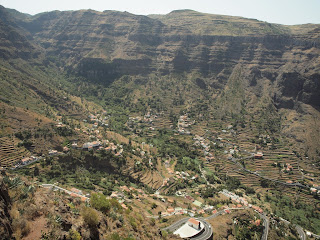 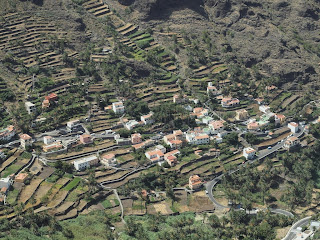 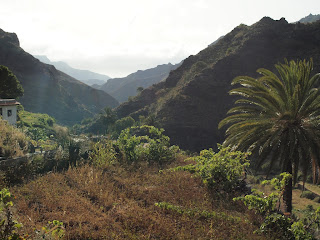 While on land the southern part of Tenerife may look a bit dull, the view from its Southeast end is one of the nicest, with dark craters in the foreground and highland and Pico Teide in the hazy back.

Leaving marina San Miguel, there is still wind bending around the south of the island, but not for long, when during the summer trade wind period one quickly ends up in the shade of the big mountains. This generally means motoring for most of the way to Gomera. But certainly not all the way, since what has been missing will be served in concentrated form about 5 miles from Gomera. The unaware may get caught by surprise, but we had watched this phenomena twice before and were prepared.

Unfortunately this doesn't stop in San Sebastian and so one has to settle with a rather wind swept marina there, falling not much short of Cape Town. It means no sun canvas allowed and plenty of dirt blown over the boats from the streets of the otherwise rather nice little town.

It is the place where already Columbus left for his his journey to the West Indies and one can still see that it was quite a good anchorage and good place to stock up one last time. The windy corner is really more in the norther part of the bay, where now the marina is. Previously anchoring was more towards the south, where we also anchored with Aventura in 1972, before crossing the ocean.

Now this would be right in the harbor entrance off the south end of a huge breakwater, where today high speed ferries enter and leave several times a day.

Every island here is very different from the other and Gomera is no exception. We toured the island again for three days via rental car, and again find it rather special. Forests in the mountains, green valleys between rough cliffs, and a few nice little villages. In size it is not so big and so one can see most places in a few days.

Tomorrow, Monday July 18, we plan to leave San Sebastian and sail to the western side of the island, where we had always found a nice anchorage just off Valle Gran Rey.

The first picture is at the Southwest end of Tenerife, all others are somewhere around Gomera.t 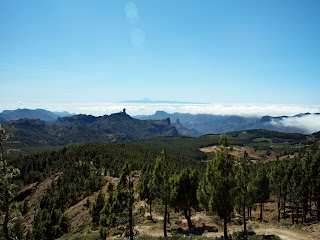 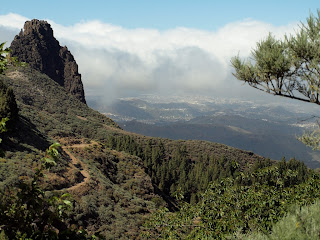 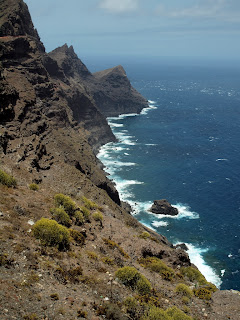 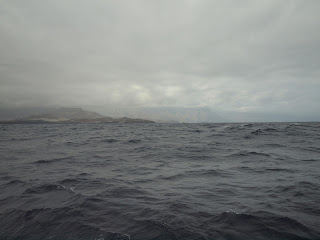 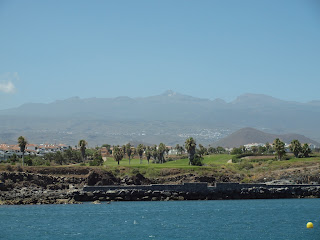 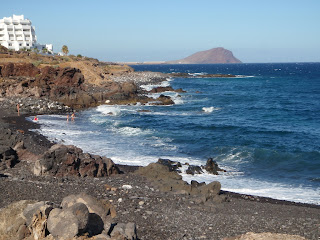 Left Marina Rubicon on Lanzarote very early in the morning and had an uneventful ride to Las Palmas where we arrived around 7 pm. Friendly received we were allowed to stay at the convenient reception dock for the night.
Next moved to the big pontoon right across, no fingers and dirty mooring lines to hassle with, but certainly vast marina id rather low priced at €13 a day for a boat our size. Consequently it is very popular with people waiting here for longer. There is also a number of chandleries along the marina front, with a pricing seemingly aimed at yachts that have no other choice, certainly no bargains compared to mainland Europe. So, no shopping for the boat, except of a new antenna for the EPIRB, the having crumbled into pieces in the sunlight.

The town of Las Palmas is really a big busy town, with chaotic traffic and certainly not pretty. The harbor very busy, with freighters coming and going all the time. Something one wouldn't expect on an island of relatively small size. Not many tourists either and the economy appears to be trade based.

We rented a car, originally for three days, but despite confirmation via e-mail, we found the city office, where we were supposed to pick up the car, closed on Sunday. So we ended up touring the island on just two days.

The contrast to Las Palmas, just a bit up in the mountains, couldn't be bigger. What a beautiful landscape, exciting roads and no civilization. Not even a bar or restaurant to have a coffee.

After five days moved on to the south of Tenerife rounding Gran Canaria around the north side, then aiming for the middle of Tenerife and as the wind accelerates bearing off towards the south.
Worked pretty much as planned only that we turned south quite late, worried that the wind would pick up even more.

We have now been five days at the windy south end of Tenerife, in the Marina of San Miguel. This time no car, as we had many previous opportunities to explore the island.
Next stop is planned to be San Sebastian on Gomera.