Madeira: End of this sailing season 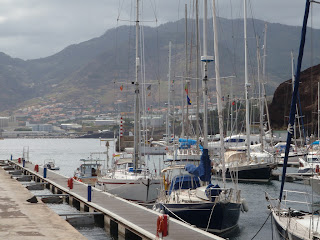 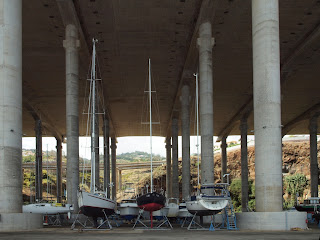 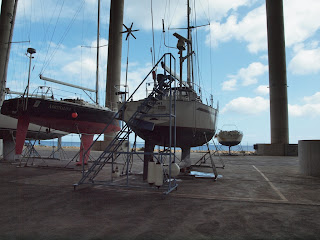 We left Santa Maria on Wednesday Sep. 14 early morning and sailed along the western end of Madeira still in the dark on Saturday morning Sep. 17. Given we had to take what we get, the wind situation wasn't so bad. At the beginning a solid northerly pushed us some 100 miles in the first 12 hours, before it started to die out. The middle day was virtually no wind and motoring at slow speed, but for our last sailing day, Neptun had chosen to spoil the crew with a light north-easterly, so that we were gliding along silently, not even heeling. Not fast, but at around 6 kts, faster than we usually run under engine on long distances.

Finally a sight seeing trip along our beloved Madeira to the marina at Quinta do Lorde on the eastern end of the isalnd. An the work, work, work, to get the boat ready for the haul out on Monday. It was a bit tricky to get the sails off and folded, with the permanently strong wind out in that marina, but we managed.

On Monday we had a last 3 mile trip to the airport and into the little harbor owned by the sea rescue. Several folks from the new shipyard were already waiting to take our lines, and after we had removed the two fore stays, a careful and skilled travel-lift operator lifted us out of the water. Now Taniwani rests under the huge runway with some protection from sun and rain. And we now have the possibility to look after the boat and do some maintenance work when we are in Madeira in the winter months. 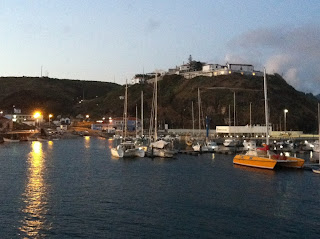 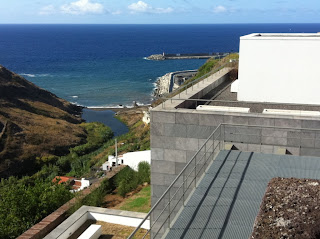 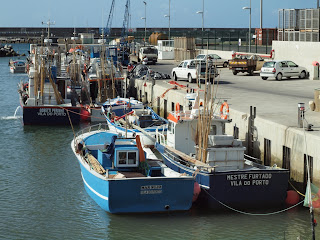 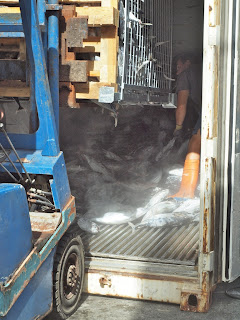 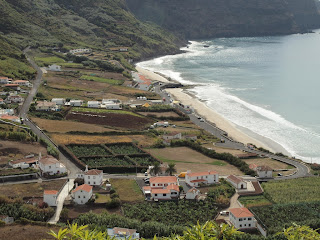 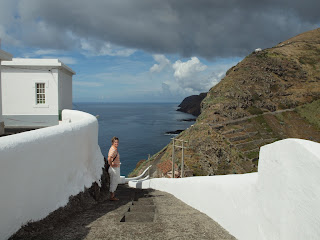 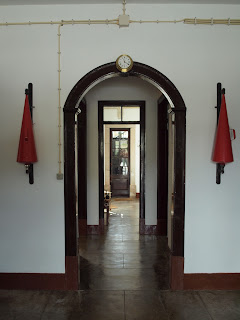 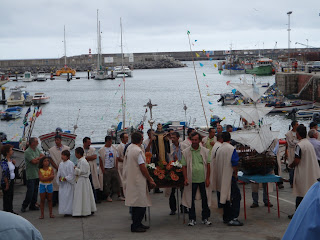 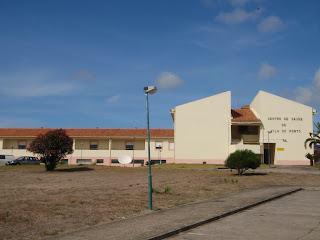 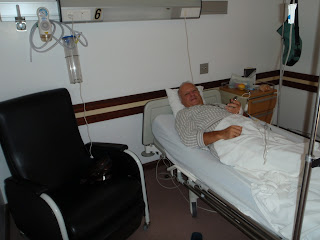 From Terceira we sailed straight to the island of Santa Maria, leaving the big island of San Miguel with its bustling town of Ponta Delgada to port. We have been there many times and a another visit would only make sense when touring the island for a few days. The vast harbor and marina of Ponta Delgada as such isn't so attractive and we rather thought of spending a bit more time in Santa Maria. Yet, at this point we didn't know that it would be a rather extended stay of 16 days!
The very new marina isn't very busy, and far from filling up. Busy however, is the fishing side of the harbor, with tuna boats going in and out all day, unloading tons of Bonitos. We were wondering what actually happens with these as they all seemed to just disappear in a big building right in the harbor. Why was there now smell of fish or anything like that? A few days later, when we strolled by and found a big door open, we got the answer. The fresh Bonitos are all shock frozen and then transferred into deep-freeze containers. Apparently they get shipped to Spain for further processing. It is all Bonitos of almost the same size. If they 'accidently' catch something different, it will likely end up on the local fish market. One day we found a 6.5 kg Yellow Fin Tuna there, that they sold us for €2.20 a kilo! We filled our freezer and had many great meals from it.
We got a rental car for a day, but the second half of that day was a bit rainy, so we had to skip the great view from the biggest mountain top, but otherwise had a nice trip to the lighthouse at the south-east corner and the little village on the eastern coast where we had lunch at our usual place.
From then on we were looking for a decent weather situation to sail to Madeira. It was a bit late in the season for the permanent north-easterly, so typical in the summer. Especially this year, the standard situation with the Azores High and a thermal Low over the Iberian Peninsula, had been spoiled already in late August, by numerous depressions, remnants of serious hurricanes that eventually track back towards Europe. And while the nasty part of this is much further north, it does mess up the weather down here as well.
Eventually we saw our opportunity coming with the westerly winds of such a depression. They would carry us for half the distance and then quickly clock towards the north-east as we get closer to Madeira. When we started to get ready for an early departure the next morning, Harald was feeling worse by the minute and late in the evening found it impossible to urinate. A serious infection, obviously caught while swimming in the bay just outside the harbor. In the second picture, taken from the new library of Vila do Porto, one can see the bay and the dirty water caused by the river, which probably carries sewer from the town. With the southerly winds all the good stuff was trapped in the bay.
As things deteriorated in the night, the kind harbor master and his son, drove us up the hill to the local hospital. Harald was quickly helped by inserting a catheter, and since he had fever and a serious infection, he was kept in the nice little hospital for five days. The very friendly staff there took good care of him and so it was possible to consider the trip to Madeira two days after leaving the hospital. Off course not without taking emergency equipment from the hospital, and now, that our scheduled lift-out in Madeira was just five days away, we couldn't be too picky with the weather.
Eingestellt von Harald & Beate um 03:32 Keine Kommentare: