It's 6 months since the last post to Taniwani's blog and it was six months that Taniwani was happily resting under Madeira's large runway. As in previous years, well protected from rain and too much sun. And living nearby, the crew was able to do all sorts of winter maintenance jobs before launching again less than three weeks ago. 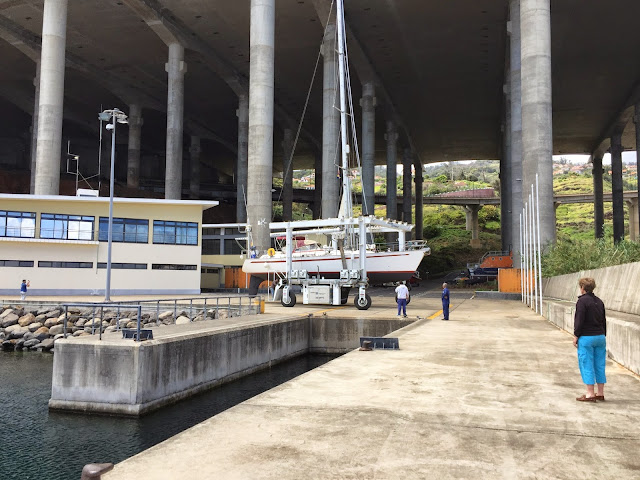 The journey started with a bit of excitement, when Taniwani tried to take the travel lift along to sea. One belt had caught the keel and as the keel has a projecting aft end, it wasn't easy to get free by any means other than undoing one end of the belt.

Commissioning work went on at the marina Quinta do Lorde, but also took longer because of a stiff Southwest preventing us to put on the foresails for two days. Once ready, we set off to Porto Santo, with the plan to enjoy the lovely anchorage there for about a week. 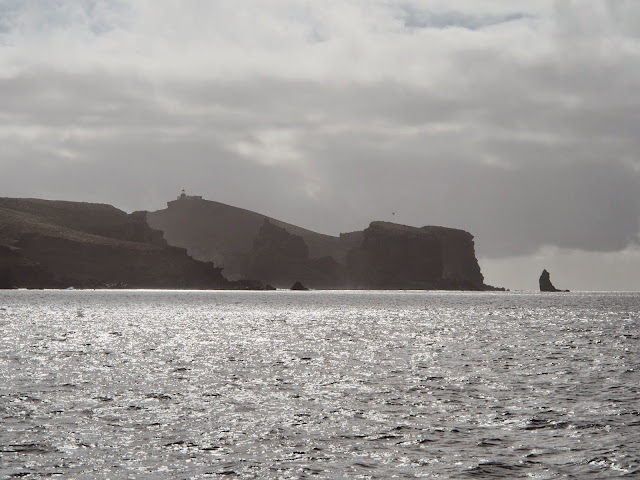 A big swell was still running from the SW, but the wind had shifted to North and we hoped the swell would be long enough, to not effect us too much, when anchored off the beach in Porto Santo. 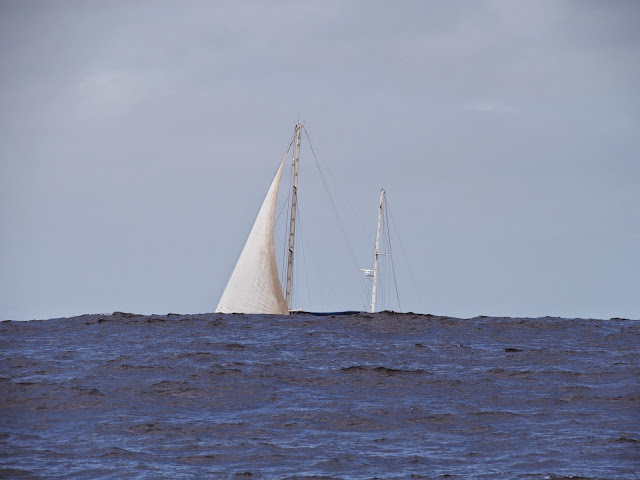 And indeed it was quite acceptable when we arrived after a nice sail across. We had a fine evening and another nice day. 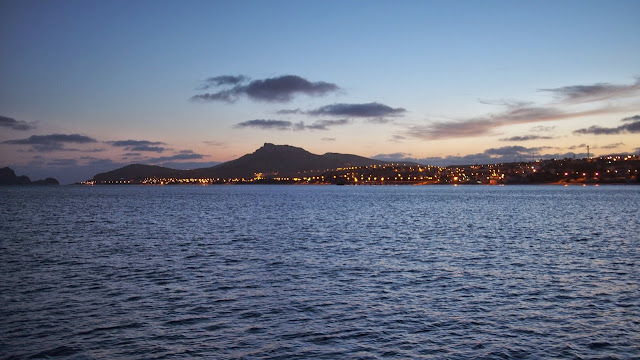 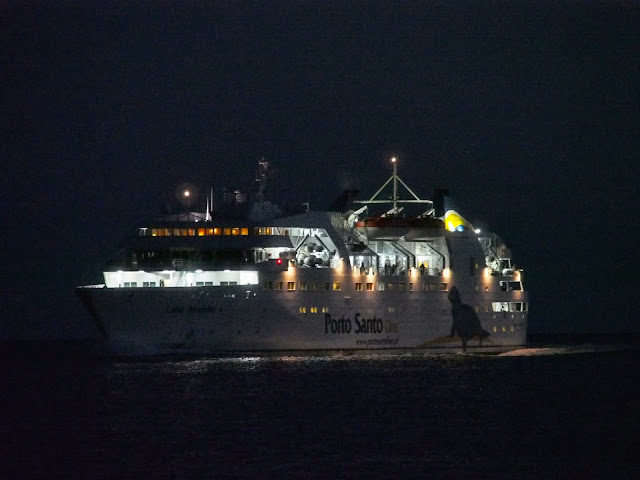 Strolling through the little town, we discussed what we would do in the next days here and whether we would hire a car regardless of the almost prohibitive price in this island. 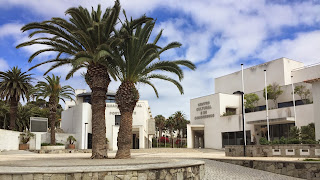 Yet we never really had to decide. The forecast for the next days seemed to indicate that the wind would shift more to the east, than would be good for the place we anchored.

We contemplated with the possibility to go into the marina for the two days that SE was forecast, but for unknown reasons, a very uncomfortable swell set in during our second night, so that we were well awake at 4 in morning and decided to move on. 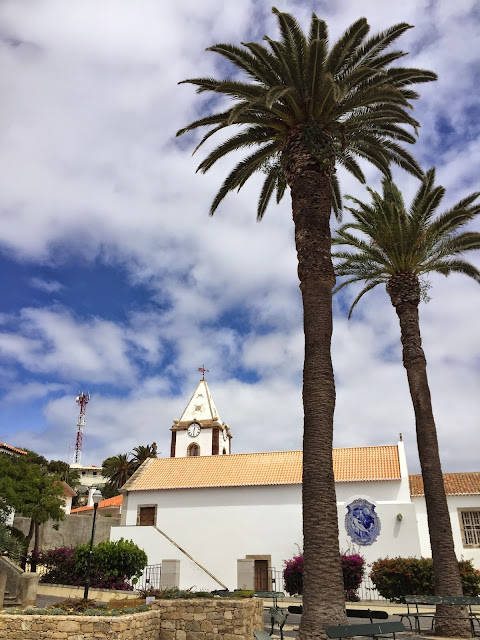 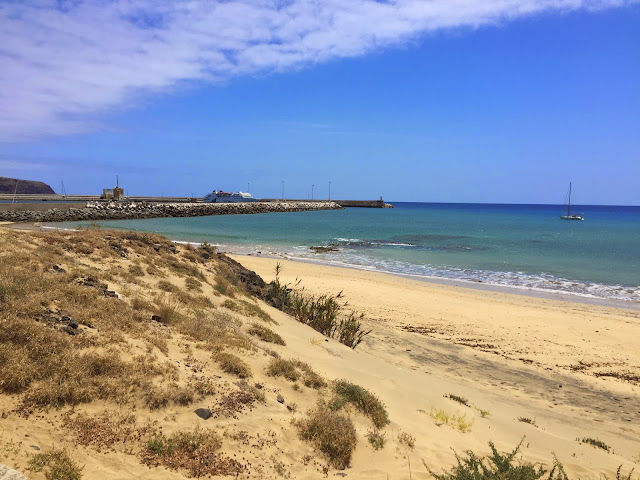 40 minutes later we were ready and weight anchor. Timing seemed right, as we had always last Madeira in the early morning hours, to sail through one night and still arrive in daylight at Graciosa the next day. In fact on all previous passages we were in before mid afternoon. This time we had some doubts as the wind was fickle initially and coming from Porto Santo, rather then Madeira, our course was more southerly and the wind more from behind. A somewhat slow angle between fast beam reaching and running down wind wing-wing. Luckily the middle part of the trip turned out fine with enough wind to make good speed and so we still arrived well in daylight. 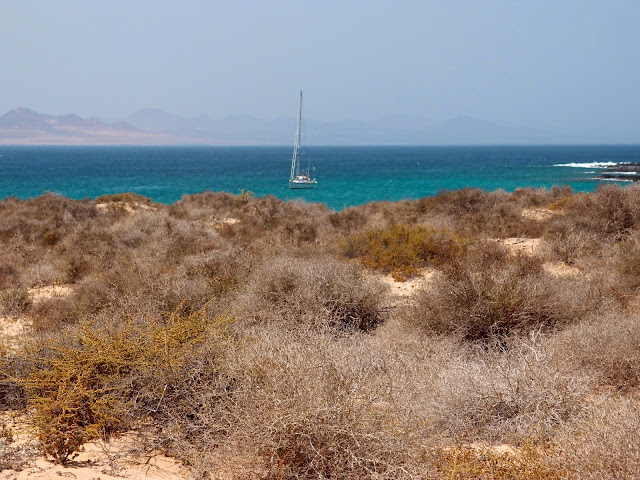 We dropped the hook in almost the same spot as last year in Baia Francesa. Since the area became a marine park, it is the only bay allowed to anchor in. Having been here many times, we know that the eastern part has a rather rocky bottom, while the western half appears to have wonderful sand both at first glance. The truth is that this sand bottom is mostly rather shallow over hard rock and in many places the anchor may not find enough sand to dig in deep enough. 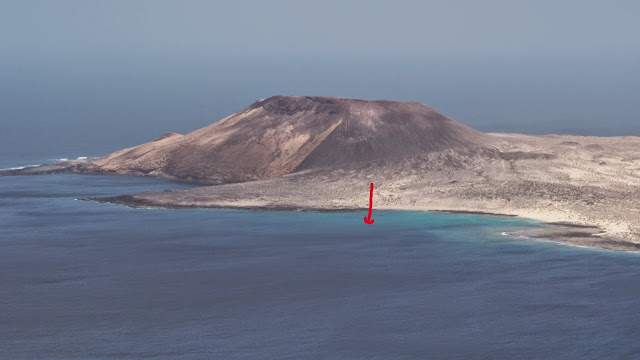 While we usually slowly put full reverse power on the anchor to make sure it sits well, we didn't give it the full pull here, as we had been able to slowly drag the anchor through the shallow sand on previous occasions. And, with the usual wind from North to NE one would simply drift out of the bay into the canal towards Lanzarote. The picture above, taken a few days later from the cliff in Lanzarote, shows the place.

Our first day in Lanzarote was an unusual hot day for so early in the season, warm air from Africa was driving temperatures up and our 3km walk to the little town of Calheta del Sebo was rather hot dessert walk.

The next day things changed, the wind picked up to 35kts and was rater easterly, so that we were hanging towards the western shore of the bay, maybe two to there boat lengths from the rocks. Normally we would not worry, but knowing that anchoring in this bay isn't bullet proof, we brought out a second anchor, for peace of mind and better sleep. Then we got sand blasted for two days in a row. After that the boat looked like in the following picture. 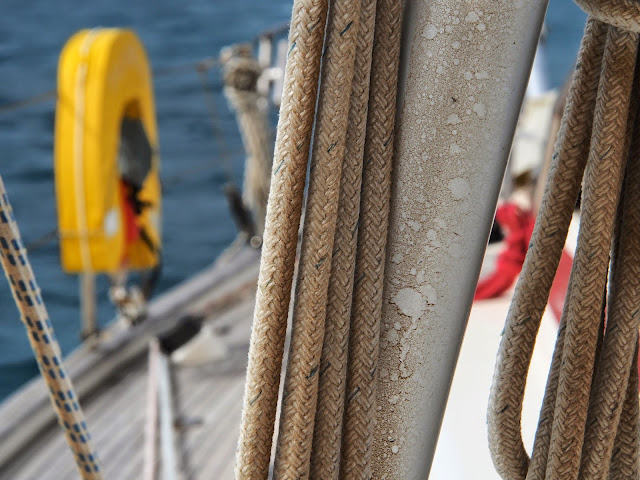 Once things went back to normal, we washed down the whole boat, fist with salt water and then again with our own produced freshwater. And only then could we have a number of dinghy rides into town, and some hikes on the island. Calheta del Sebo is a lively little village, with hundreds of tourists coming by ferry from Lanzarote every day. Two large catamarans go out in the afternoon and moor in the same Baia Francesa for two hours, unloading their passengers to the beach. But it seems that they spare Sunday for themselves when Sebo citizens enjoy life in the streets and on the beach. Some impressions follow: 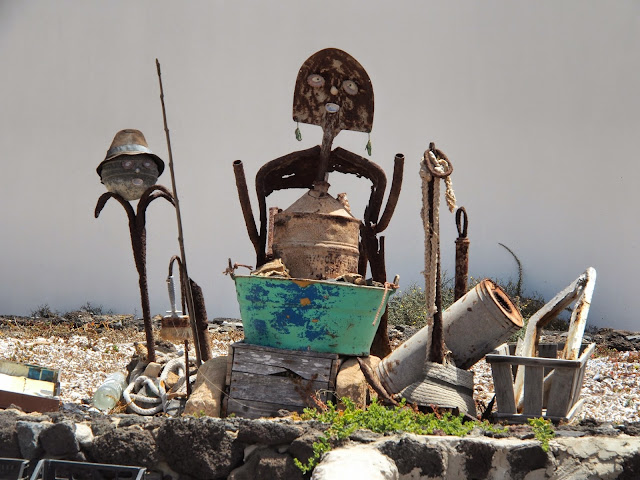 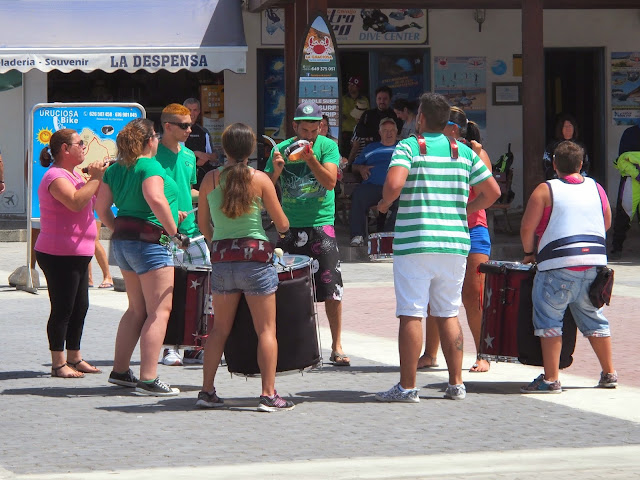 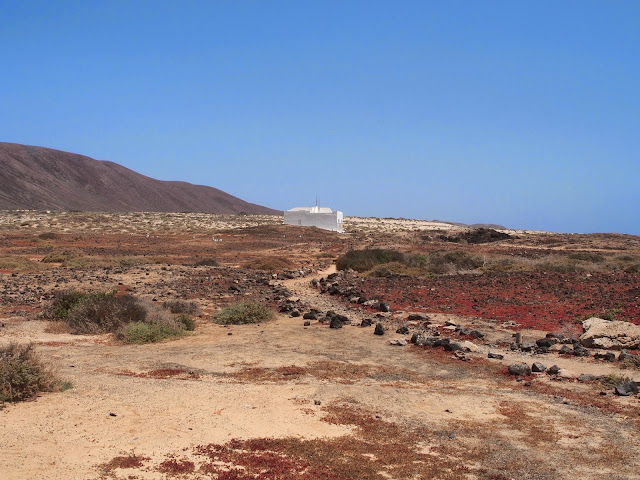 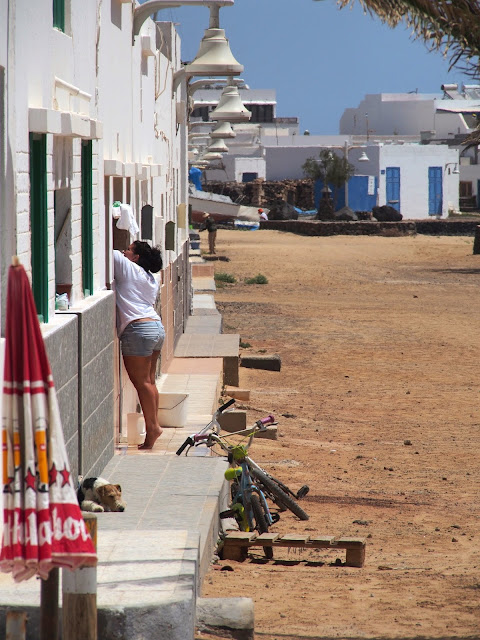 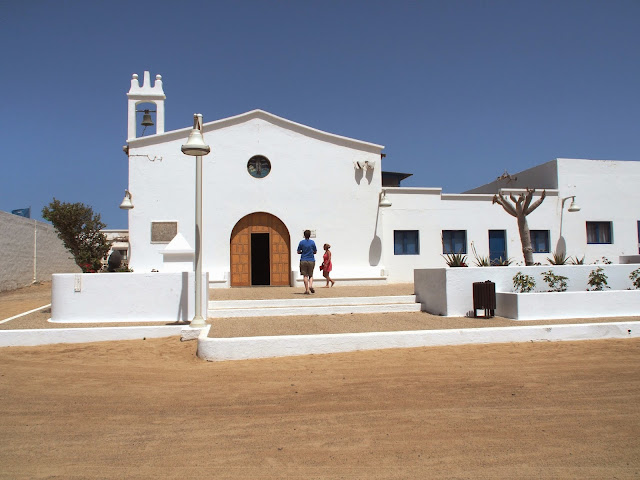 We spent a full week at our favourite anchorage in Graciosa, before moving on to Arrecife on Lanzarote. In Previous years we used to go to marina Rubicon in the south or Puerto Calero on the southeastern side. Meanwhile a new huge marina was built right in the main town of Arrecife. Last year we had a brief visit there, but the marina was still under construction and the place on the temporary pontoon wasn't so great in the often strong wind that gusts through the valley into the harbour. Now, that the marina was supposedly in full operation, we wanted to give it a new try. 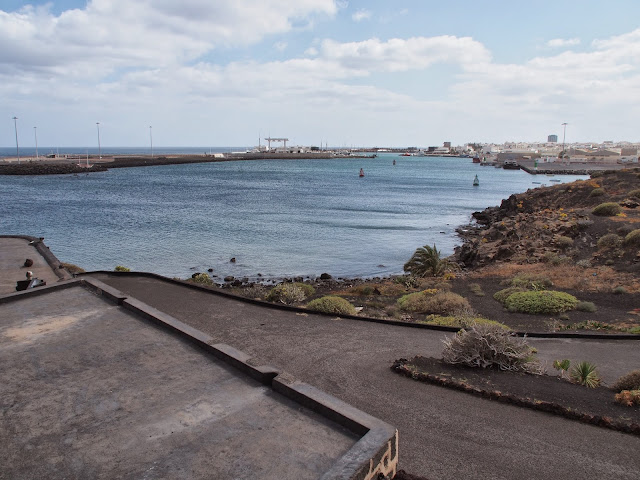 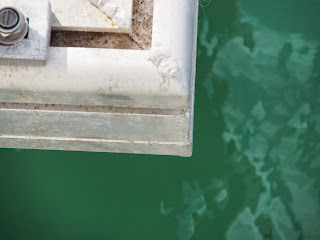 We should soon learn, that the marina wasn't really finished yet. Many pontoons and fingers still offer the raw aluminium frame to your boat and some rather sharp edges. This combined with strong gusts of wind from the side and a non attentive skipper, left a nasty scratch in Taniwani's topside. A first for Taniwani, and hopefully the last such incident.

As for the wind, it seems the harbour in Arrecife is one of the windiest places on the island. But these days it was blowing everywhere and if you consider one of Cesar Manrique's pictures, it becomes clear that strong wind is a feature of this lovely island. 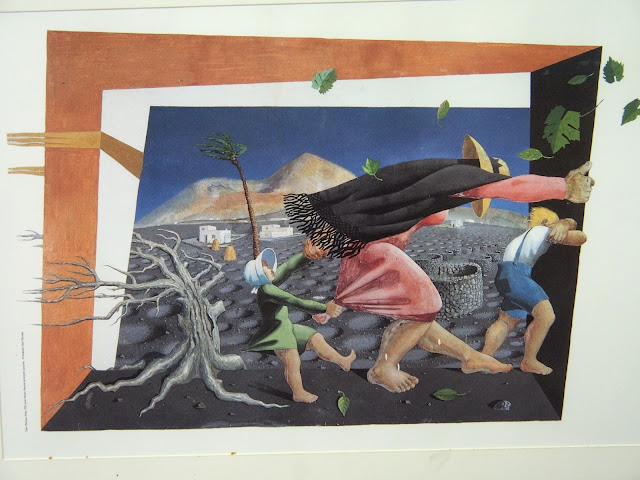 More pictures can be found in the permanently updates cloud album of this years sailing.